The Board of Directors of BridgeLink commends the recommendation of Central Corridor 1 for the placement of a new I-69 bridge. This location is proven to be the best location for economic development, cross river mobility, ease of traffic congestion, and minimal negative local impacts.

BridgeLink Chair Robert Koch said, “A new I-69 bridge is critical to the success of I-69 corridor, through Indiana, Kentucky, and nationwide.  Our two states have been leaders in the effort to construct a completed national corridor.”

Central Alternative 1 includes a 4-lane I-69 bridge and retains the northbound US 41 bridge for local traffic. It includes new interchanges at US 41 (south end), US 60 and Veterans Memorial Parkway.  BridgeLink will continue to advocate to keep both US41 spans open to traffic.

While the state DOT’s study indicates that tolling will likely be necessary to pay for the new I-69 bridge, the members of BridgeLink will work diligently to keep the US 41 bridges free for local traffic.

Mayor Steve Austin of Henderson said, “Keeping US 41 toll-free for our local traffic is imperative to the success of our people and businesses.  I-69 is a true benefit for our communities when the project recognizes the difference in interstate and local traffic.”

The states of Indiana and Kentucky have worked very hard to make the I-69 river crossing a reality, and the release of the Draft Environmental Impact Statement by our two state departments of transportation is a critical step required to move to construction of this important link.

According to the joint Indiana-Kentucky studies of the need for the bridge, the location of the existing bridges is home to several high-crash locations.  In addition, studies found that the existing infrastructure “strains to efficiently handle the cross-river volume of traffic”.  With the construction of the new I-69 bridge, we will have relief from the safety issues and prevalent congestion found around the US41 bridges.

Henderson County Judge-executive Brad Schneider agreed, saying, “Henderson and all of western Kentucky will see tremendous benefit with this new bridge, and I thank the states for their commitment to see its construction.”

With the approval of the Central Corridor 1 alignment, our communities will see the benefit of a new bridge without the cost of up to 306 homes and businesses displaced.  Central Corridor 1 provides the best of all worlds for our area, and impacts will be seen immediately.

BridgeLink will participate in the Public Hearings scheduled in January 2019. The schedule is:

• January 7, 2019 at the Henderson Community College

Members of the public are invited to provide testimony in support of the route and the prompt construction of the I-69 Bridge.

The Final Environmental Impact Study is expected to be completed in the fall of 2019, and construction could begin within several years after.

BridgeLink is an advocacy group comprised of elected, civic and business leaders in Southwest Indiana and Western Kentucky who are committed to the construction of the I-69 Bridge between Evansville, Indiana and Henderson, Kentucky.

At a press conference today in Henderson, KY, Indiana Governor Mike Pence and Kentucky Governor Matt Bevin announced and signed a Memo of Understanding to begin the I-69 bridge project. “Effective today, we will initiate both the study and design of a new bridge for I-69 over the mighty Ohio River,” said Governor Pence at a standing room only press conference.

In a press release sent out by the Indiana Department of Transportation, both Governors shared these thoughts. “As the Crossroads of America, we know that roads mean jobs here in the Hoosier state,” said Governor Pence. “The partnership we are announcing today is a significant step in completing the vision of I-69 that will strengthen our transportation network and support economic investment and opportunity for generations of Hoosiers to come.”

Governor Bevin added, “I-69 is opening up Western Kentucky like never before. Advancing the Ohio River Crossing will continue to build on that momentum. This additional north-south trunk will invite investment and spark further job growth in Kentucky. Our partnership will pay dividends for the entire Commonwealth.”

This is a monumental announcement as this critical infrastructure project now moves closer to becoming a reality. The Request for Proposals for the Environmental Impact Study will be released in the coming months. For more information about the project from the Indiana Department of Transportation, visit www.I69Crossing.indot.in.gov.

(Henderson, KY)- The Board of Directors for 69 BridgeLink commend the leadership and support for the I-69 bridge project by Kentucky Governor Matt Bevin and the Kentucky General Assembly during the 2016 legislative session.

The passage of HB 309 will allow Public-Private Partnership (P3) financing in the Commonwealth. A P3 allows the Kentucky Transportation Cabinet (KYTC) a critical new financing tool to begin to build this critical piece of infrastructure.

The bold actions of the Governor and Legislature to invest $28.8 million in pre-construction funding for the I-69 bridge found in the Commonwealth’s transportation budget over the next three years will prove to expedite the economic development and prosperity for Western Kentucky and Southwest Indiana. Here is a breakdown of the funding:

With an eye to the future, the General Assembly also included another $15 million for utility work in their recommendation for later years.

“The priorities laid out in the Kentucky legislature are so important to moving this project forward,” said BridgeLink Chairman Bob Koch. “$28.8 million in funding is a huge commitment by Governor Bevin and the Kentucky Legislature. We applaud their leadership and vision for this project. We will continue to work with Governor Mike Pence, the Indiana General Assembly, and INDOT to secure adequate funding from Indiana to continue our momentum to completing this project.”

Background: On October 14, 2013, the Southwest Indiana Chamber, Kyndle, and the mayors of both Evansville and Henderson announced the creation a non-profit advocacy group, BridgeLink, whose sole focus is to advocate for the building of a new interstate bridge linking I-69. BridgeLink’s mission is to advocate for the construction of a new tolled Interstate 69 bridge by no later than 2020 and preservation of an untolled route across the river for local residents. For more information please visit www.69bridgelink.com.

On Monday, August 17, the Southwest Indiana Chamber hosted an event focusing on the future of transportation funding. Much of the event focused on local projects, including the I-69 bridge. See coverage below:

After the event, the Evansville Courier & Press ran an editorial in it’s Sunday, August 23 paper, further highlighting the need for a new I-69 bridge:

BridgeLink is proud to have the I-69 bridge names as a tier one project.

The Indiana Senate passed a key piece of legislation that will allow transportation officials to decide the best route for I-69 into Indianapolis. HB 1036, authored by Rep. John Price (HD 47) and Sen. Rod Bray (SD 37), passed with a vote of 31-19. The bill will now move to Governor Mike Pence’s desk.

HB 1036 removed language from Indiana’s Major Moves legislation that required legislative approval for use of the Indiana-37 corridor. Currently, I-69 is running up the I-37 corridor from Bloomington, IN to Martinsville, IN.

Key partners, including BridgeLink, Hoosier Voices for I-69, the Southwest Indiana Chamber, the Indiana Chamber, and various local Chambers up and down the I-69 corridor, advocated for his piece of legislation.

The Indiana State Senate Homeland Security and Transportation Committee will hear HB 1036 on Tuesday, April 7th. The bill would remove language preventing I-69 from being built through Perry Township, outside of Indianapolis. The bill impacts the final leg of I-69 connecting the new route from Evansville into Indianapolis. The bill passed the Indiana House of Representatives 83-11 in February.

Route for Final Section of I-69 Clears House Panel

Check this out for progress on I-69 in Indiana.

Link to the article.

We appreciate the leadership of Rep. Larry Bucshon and Rep. Ed Whitfield on I-69. We look forward to meeting with the I-69 Caucus in April.

Link to the article.

It’s that time of year again. We’re happy to back at the Kentuckians for Better Transportation Conference in Lexington. 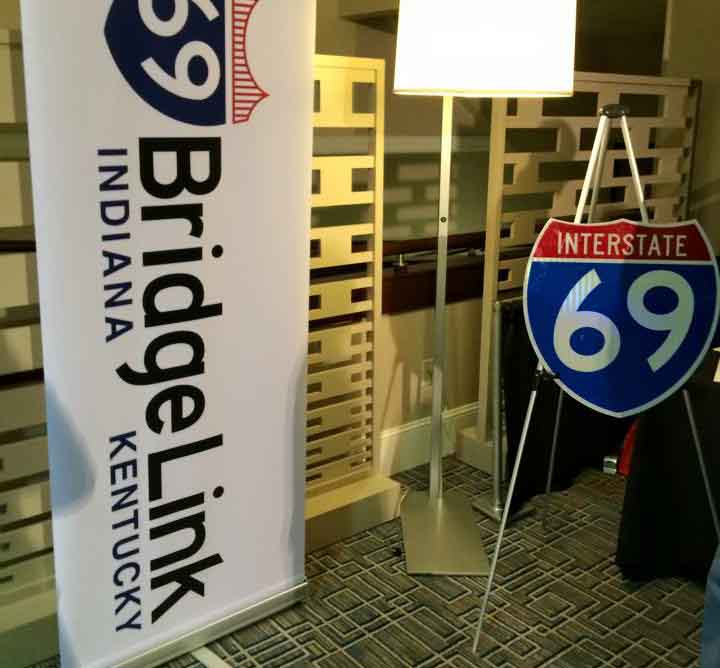